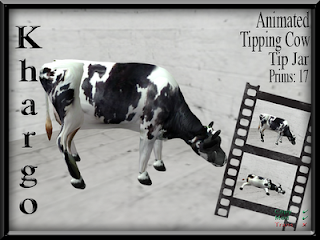 There's lots been happening at Khargo: Tip Jars. First, we updated our tip jar scripts to include a feature many people have asked for - the ability to adjust the floating text above the Tip Jar to reflect it's use. So if it's being used as a split percentage - maybe for a duo - then it could be called Ke & Sel's Tip Jar (as an example) or for a venue - My Wish Tip Jar.

Ke has been playing around with animating prims which has led to our new Animated Tip Jar Range. It's a small range just now comprising of a Tipping Cow (after the urban myth of cow tipping) and a peek a boo ALF in a box - tip him if you dare! We have more ideas coming up for this range :) 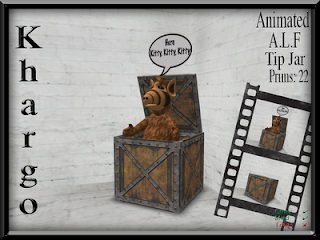 We've added a lot of new tip jars to our standard range - from a simple sculpted "Tip Jar" to a very cute voodoo doll and many different styles in between - check out the slide show for the new additions or see the complete Standard Range at our Flickr, our in world store - Khargo: Tip Jars or on Xstreet.

All our Tip Jars are made with the best sculpties, textures and low lag scripts you can find. Khargo has been building all sorts of different tip jars since 2007 and is a well known brand amongst artists, hosts, venues, dj's and other people who use tip jars
Our tip jars are probably the most advanced and most original you can find on in SL and are really easy to configure through a simple notecard.

Finally, we've also been making some custom Tip Boards for artists including Skye Galaxy, Gina Stella, Arturo Martinsyde and Anek Fuchs - look out for them at their gigs around SL. For your own Custom Tip Board contact Keanu Kharg to discuss your requirements.
at 7/16/2010 09:44:00 pm No comments: Links to this post

Helios - Lounge in the sun

Updated, contemporary version of our sunlounger set with new loungers, parasol and table, ready for the SL summer sunshine! 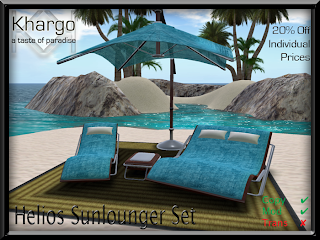 All items have a texture change menu which includes over 80 textures in some items so you can fit them to your style. 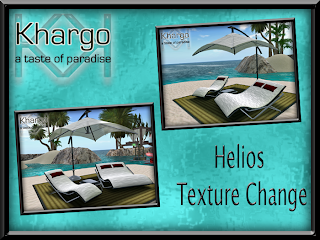 Both loungers have animated poses accessed by a menu. There are 12 couple animations on the big lounger and 6 single sits on the smaller lounger. 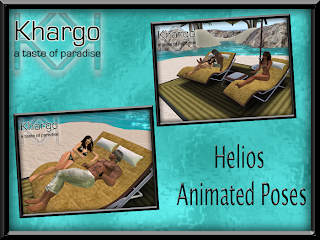 The whole set is only 32 prims in total and made with the best sculpties, animations, scripts and textures in SL.

Helios Sunlounger Set is available at a discount price for a limited time on Xstreet.
The full set and individual items are available to buy, view and try in world at Khargo Main Store.